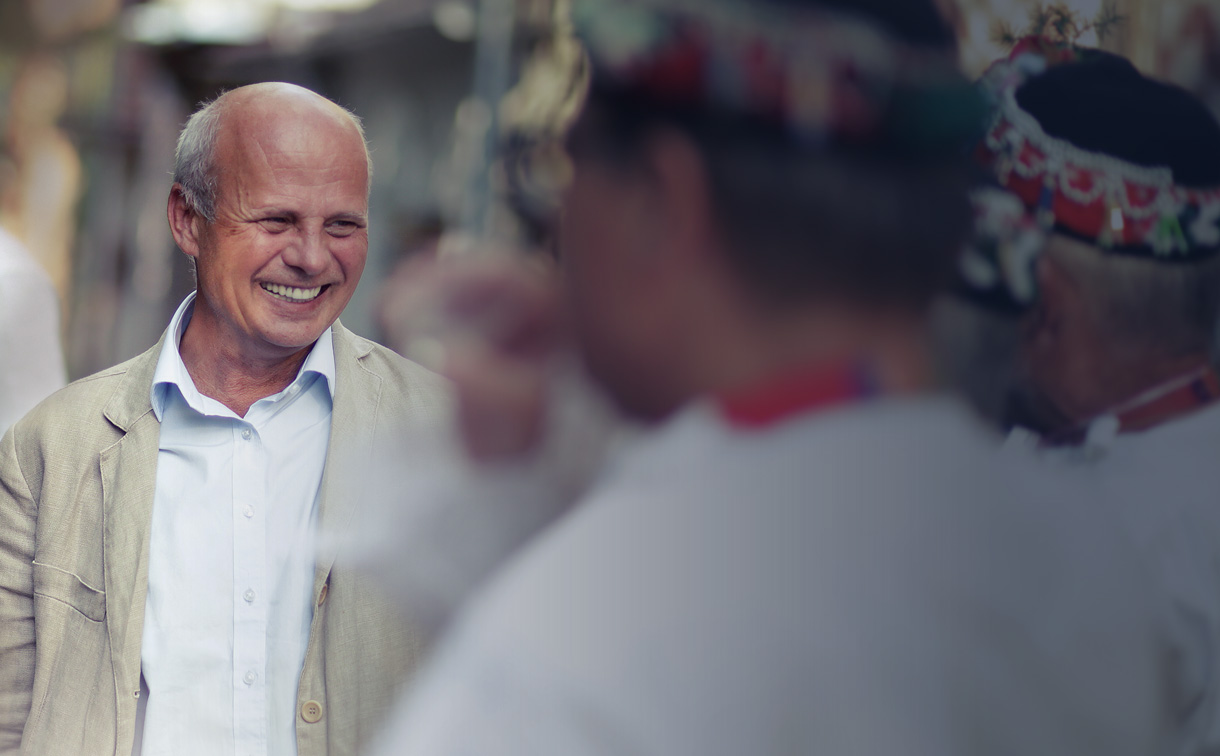 Having entered Charles University’s Faculty of Journalism in 1970, he was expelled in 1974 following an intervention by the Secret Police. Arrested at the Prague Airport upon his arrival from the United States, he was put into a detention jail and later charged with forgery. This was indeed a valid charge, as he had asked for, was denied and eventually forged a rubber stamp of the Socialist Youth Union – one of the many rubber stamps required when asking for an exit visa. Since he never was and never wished to be a member of the Socialist Youth Union, he could not hope to get that organization’s approval of his travels beyond the Iron Curtain. What he did hope for, though, was visiting the free world. And he did.

Expelled from the Charles University, he tried his luck at life-guarding, dishwashing and other walks of life, and finally landed a job at a co-operative offering work opportunities for the disabled. Since 1977, he started publishing abroad: first in Australia, later in Great Britain and in America. His articles for The Thoroughbred Record, published in Lexington, Kentucky, won him an award (1982) and helped him gain a stipend at the World Press Institute. The most important occurrence of his artistic life was the beginning of the three-decades- long co-
operation with composer Petr Hapka, in 1984. By 1987 the two released the album Sly Guest (Potměšilý host), which was eventually voted Album of the Year; all the songs were performed by Czechoslovakia’s acclaimed chanteuse, Hana Hegerová. In the eighties and nineties, and also in the first years of the noughties, they garnered many nominations for Album of the Year or Song of the Year and received a total of six awards. (As a lyricist and producer, Michal Horáček then won three more Angel Awards for his own projects.)

In 1986 he entered big-time journalism as a reporter for Mladý svět, Czechoslovakia’s paramount news weekly. One of his first journalistic projects was an attack against Pragokoncert, the state monopoly importing live music performances. They bought very little beyond Soviet and other socialist rock-and- roll groups and finally had to cave in to the pressure from Mladý svět and reform their policy. The ground-breaking Westerners on the Czech scene would be Depeche Mode, and others soon followed suit.
Another battle was fought and won in 1989. In what amounted to be the first investigative report published in Communist Czechoslovakia’s official media, Michal Horáček (OSA Nostra; with co-author Luboš Beniak) unearthed the outrageous rules which allowed Communist officials to take royalties from successful composers and lyricists and pass them on to unsuccessful but ideologically “sound” comrades. What turned out the be the most important venture of the Mladý svět era, however, was a series of columns entitled Letters of Love and Hate (Dopisy z lásky a nenávisti, 1989). Personal messages, seemingly addressed to various personalities of various times and places, but in fact to the vast readership of the newsmagazine on the eve of the anti-Communist Revolution, slowly grew into a kind of mosaic, presenting to the readers a world of personal responsibility, of freedom to seek happiness according to one’s own standards, of rules that should be respected and yet continuously improved… a world wholly different from the pathetic environment of the moribund communist system. And then, on November 17, 1989, came the Revolution.

By the summer of that crucial year, Michal Horáček and the local rock star of the time, Michael Kocáb, established a civic initiative called MOST (Bridge). It sole objective was to provide grounds for eventual talks between the Communist government and the dissidents. Very few gave MOST more than a passing chance to succeed; however, situation was dramatically reversed by the outbreak of vast and ever-growing civic gatherings that, in a matter of hours, grew into an outright anti-Communist revolt. In a mere three days, MOST successfully organized talks between the Communist prime minister and the dissidents, headed by the playwright Václav Havel. This dialogue helped shape the peaceful transition of political power in Czechoslovakia. During those dramatic days and hours, Michal Horáček served as Civic Forum’s (Revolution’s leadership) spokesperson for foreign media. With Václav Havel ascending the presidency and with the country on course to its first free elections in 43 years, Michal Horáček retired from the leadership of the Civic Forum.

Having published his bestselling eyewitness account of the inner workings of the revolution, How the Ice Was Broken, Michal Horáček earned enough financial means to start a more ambitious project: Fortuna, Czechoslovakia’s first bookmaking firm. By the time he sold it, Fortuna was a huge company, employing over 3,000 people and yearly grossing billions in turnover. At the same time, it became well known for its support of a number of charities. Since its inception, Fortuna, a stock-holding company, had Michal Horáček as Chairman of the Board and CEO.
In 1999, Horáček made a million-crown bet with a business partner as to who would run the distance of 5,000 metres faster. He won in 21 minutes and 46 seconds, eventually distributing all the money he had won to charities. One of such projects was the Centrum Paraple, taking care of paraplegics. Since then, the Run for Paraple has become an annual event, attracting both celebrities and the general public, running against each other and making bets, the loser paying out not to the winner, but to Paraple.

In December 2004 Horáček and the other co-founders of Fortuna (and partner companies in Slovakia and in Poland) sold 100% of the company’s stock to a group of investment bankers. The deal amounted to the second-largest transaction of the year in the Czech Republic. Simultaneously, Michal Horáček retired not only as Fortuna’s CEO, but exited the entrepreneurial world altogether.

In 2003-2004 he published a weekly column in the national daily, Lidové noviny (collected in a book as On the Motherland’s Fathers‘ Czech Blood), for Hospodářské noviny in 2006 (collected in a book as On the Secret of the Queen of the Cows).
In 2005 he accepted an offer from Nova (the most popular Czech television channel) to become the chairman of the jury of Česko hledá superstar (the local analogy of the American Idol).
In 2011, he finished his studies (General Anthropology at the Faculty of Humanities, Charles University, Prague) by defending his doctoral thesis. In December 2012, it was published in a book
form under the name Gamblers’ Habitus. In 2013 and 2014 he toured the Czech Republic and Slovakia with his recital, visiting a number of venues in both countries.

In 1989, Michal Horáček took an active part in politics because he felt that society was facing great historical challenges that he should help facilitate. In 2016, he thought the situation was similar: a struggle between honest participation in building liberal democratic society and cementing relationships with like-minded allies in the European and Euro-Atlantic space on one hand, and forces that wish to derail the course of Czech politics set by the Velvet revolution on the other hand dramatically escalated, requiring personal involvement of those who can play a significant part in it. In spring 2016 he conceded he might stand as presidential candidate, and in autumn of the same year, he announced his candidacy “unequivocally and irreversibly“.

What I stand for